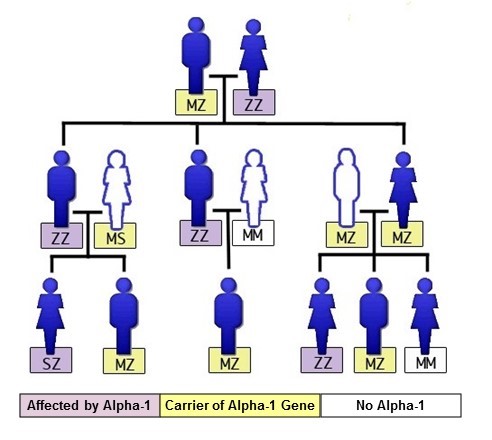 So, if you are ZZ or other serious combination, you will automatically pass on one faulty gene. If your partner is also ZZ the children will be ZZ.

If your partner has just one faulty gene e.g. MZ, then the children could be either ZZ or MZ depending on which gene they have inherited from them.

If you are an MZ carrier and your partner is the same, then the children could be ZZ, if they are unfortunate enough to inherit both faulty genes. Alternatively, they could be MZ (or ZM, basically the same). On the other hand, they could be lucky and inherit both normal genes (MM).

It therefore follows that an MZ carrier partnered with someone who has normal MM genes, would have children who are either MZ carriers or completely normal, with MM genes.

Carriers of A1AD have less AAT than “normal” people but they do usually have enough in their bloodstream to prevent serious problems.

It isn’t really understood why but all Alpha-1 patients, including some carriers, do seem to be more susceptible to picking up colds and ‘flu, resulting in secondary chest infections. Therefore, it is just as important for carriers to look after themselves and it would be sensible to avoid smoking, and drinking to excess.