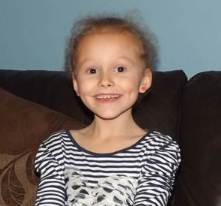 For the past seven years we have battled to find out what Evie has wrong with her, we have finally been told what she has and it is called Alpha 1 antitrypsin deficiency, this has the possibility to lead to lung and liver disease.
It isn’t something that many people know exist, so I would like to help raise awareness and funds to help my daughter and other people with this condition. If you would like to donate to this Charity please use this link, Thank you

A bit about Evie’s story so far…

When Evie was born she was jaundiced, we obviously didn’t give this
too much 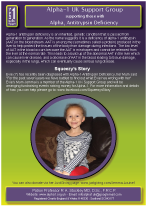 consideration as many babies are born that way. At only 10 days old she stopped breathing and turned blue. We rushed her to hospital and found out she had suffered from a collapsed lung. She was placed on oxygen, given intravenous antibiotics and fed through a tube. At that time we were told to prepare ourselves for the worst! Thankfully she held her own and they started to tube feed her Nutramagen as she was also suffering from reflux and was intolerant to breast milk. After 6 months in hospital in Cornwall she was transferred to Great Ormond Street and remained there for 2 weeks.

She was tested for many conditions, including Cystic Fibrosis and Ciliary Dyskinesia but never Alpha-1 Antitrypsin Deficiency, although we now know that being a jaundiced baby should have automatically triggered that test. Evie continued to remain underweight and all wheat and gluten was removed from her diet. This helped a little and she did start to grow and put on the tiniest amount of weight.

For the last 7 years Evie has had a chest infection for pretty much 3 weeks out of every 4. She has also had a few kidney infections although we are still unsure if there is any connection to Alpha-1! She remains hugely underweight for her age and has to drink Fresubin calorie drinks, we also add Duocal in powdered form to her food and drinks to boost her calorie intake. She also takes Azithromycin daily which is an antibiotic, in addition to the antibobiotic she takes to treat any infection, and uses two inhalers daily.

Due to the constant infections Evie tires easily and has subsequently missed a lot of schooling. Jemma, Evie’s mum, had to give up her job because of the amount of time she needed to take off work to care for Evie whilst she was ill.

On average it takes 7 years for someone to be finally diagnosed with Alpha-1 Antitrypsin Defiency, please help us raise awareness of this rare genetic condition by liking and Sharing Squeezy’s Story.

Mum Tells of Battle to Find Treatment for Daughter – Pirate FM has learnt that a Newquay schoolgirl has spent her whole life in and out of hospital because of a rare genetic illness. Seven year old Evie Masters has Alpha-1 Antitrypsin Deficiency.

A NEWQUAY mother has begun a fundraising mission to help raise both awareness and funds for a rare disease. Gemma Masters held a charity open-mic night in Porth last Thursday evening in a bid to raise vital funds for Alpha-1 UK Support Group. Around 30 people attended the event which also helped raise awareness of Alpha-1. Gemma said: “Only 5% of children show symptoms as a child. As a result of it, Evie gets recurrent chest infections and suffers poor weight gain. We have been battling to find out what is wrong with her since she was born seven years ago. It apparently takes seven years to detect but, even though you are born with it, people don’t think to test for it because it’s so rare.”