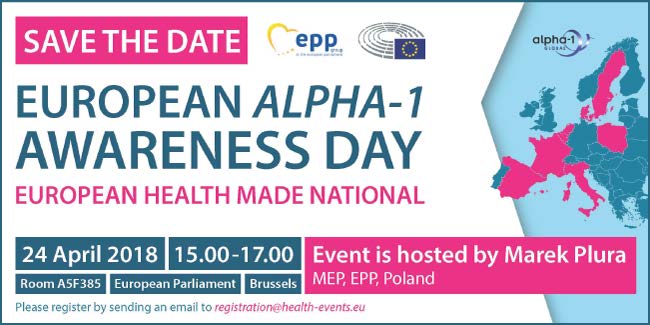 For the first time in history, the European Alpha-1 Community celebrates an EU Alpha-1 Awareness Day, on 25 April 2018. Among other activities, the main “kick-off” event takes place the day prior (24th) in the European Parliament from 15:00-17:00hrs. MEP Marek Plura (Poland) will host a round table discussion for MEPs, during which time patient representatives will provide updates from the following countries: Austria, Belgium, Germany, Italy, the Netherlands, Italy, Romania, Spain, Switzerland and the United Kingdom. The event is organized by RPP Health Care and sponsored by Alpha-1 Global, a program that facilitates collaborative efforts among Alpha-1 associations around the world.

The EU Parliament gathering is directly related to the development of the Alpha-1 European Expert Group Recommendations; a document that was created to raise awareness among governments, health systems, health professionals and society in general about the importance of diagnosing, treating and investigating Alpha-1 Antitrypsin Deficiency (AATD).

Combined action is sought in Europe in support of the early diagnosis and correct treatment of people with AATD, especially considering that there are still European countries that do not reimburse plasma derived augmentation therapy for AATD patients with severe lung disease and skin diseases such as panniculitis.

The Recommendations address the complications of uncontrolled pulmonary and liver diseases. “The main difficulty of handling Alpha-1”, the document reflects, “is the early diagnosis, which most patients do not obtain until they already have severe symptoms despite the low cost and effectiveness of diagnostic means.”

The challenge is to consolidate approaches for the training of health professionals and patients, and facilitate the exchange of knowledge, in addition to promoting diagnosis and extending the network of centers of excellence for Alpha-1. “The problem of Alpha-1 is not so much the number of affected patients as their quality of life, which can be significantly impacted by the delay in diagnosis and limitations in access to treatment.”

The document proposes to the member states the development of a plan for the diagnosis of AATD, within the framework of their Rare Diseases programs. It also alerts health professionals to the need to perform the deficit tests for all patients with COPD, bronchial asthma, bronchiectasis and liver diseases of unknown origin, as well as people with a family history of AATD.

The European Commission is requested to update its CORDIS study (2002) to find the current status of genetic testing for rare diseases and to issue subsequent recommendations for countries to promote an approach based on maintaining a high level of human health and not discriminating against patients taking effective steps to avoiding both human and health system costs.

Air quality (interior and exterior), toxicity of chemical products in the workplace and pollution, are other aspects on which the Recommendations reflects, taking into account that “in environments with contaminated air, the organs of patients with a deficit degenerate in a significantly faster way than those of the remaining patients with COPD. ” Poor air quality is a “silent killer that currently affects 90% of residents in EU cities, especially lung patients,” says UK parliamentarian Seb Dance. “One of the measures that policymakers can adopt to improve the health of Alpha-1 patients is to achieve the highest standards of indoor and outdoor air quality.”

The Recommendations also express the need for EU countries to coordinate their efforts. The creation of an EU stamp is requested for the accreditation of Centers of Excellence and its registration in the Orphanet database, as is already the case with Reference Centers in Rare Diseases. Implementing the Cross-Border Healthcare Directive, to support the rights of patients to have the best possible care, is another of the demands included in the document.

Translated from the article by Elena Goyanes on the Alpha-1 Spain website:
https://alfa1.org.es/dia-europeo-del-deficit-de-alfa-1-antitripsina/